We are proud to announce our Commercial Director Peter Hardy completed the Great North Run raising money for the UK charity: Guide Dogs. Peter successfully finished the run in just 1 hour 57 minutes and has so far managed to raise an amazing £555 for the cause.

Peter is still collecting and if you’d like to help out a great cause, you can visit his fundraising page here.

Guide Dogs UK are a fantastic organisation who (for more than 75 years) have been involved in expertly breeding guide dogs to assist thousands of blind and partially sighted people all across the country. Furthermore, the charity also actively campaigns to support equal rights for visually impaired people with endeavours including access to transport and better rehabilitation services.

A recent survey found that 75% of assistance dog owners have been refused access to a restaurant, shop or taxi in the last 6 months. One of Guide Dogs’ most recent campaigns centres around ensuring visually impaired people benefiting from the help of dogs are allowed access to restaurants.

Another example of their work is the passing of the Anti-Social Behaviour, Crime and Policing Act in March 2014. Guide Dogs campaigned for the law to be passed and this has resulted in attacks on assistance dogs now being treated as an aggravated offence with penalties of up to three years imprisonment. This new law has made guide dogs safer than ever and is a testament to the charity’s commitment to improving the welfare for both the visually impaired and the animals themselves.

Peter was one of Eco’s first employees, joining shortly after the company’s inception in 1993. Throughout his time at the company, he has held a number of different positions including Trainee Manager and Key Account Executive before being appointed Commercial Director on 13th March 2014.

We would like to congratulate Peter for his dedication over the weekend and, of course, to Guide Dogs UK for their incredible work over the years.

To find out more about the great work Guide Dogs UK do, please visit their website here. 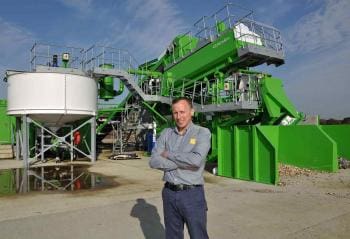 A £1 MILLION investment by a Dorset recycling company looks set to save council taxpayers hundreds of thousands of pounds every year. Eco Sustainable Solutions has installed new state-of-the-art equipment at its Parley site to recycle gully waste and street sweepings including leaves, grit, sand and silt. The plant, which will handle up to 30,000 […]

If you’ve been in the market for buying a house – or even just thought about buying one –, you will know just how valuable the outdoor spaces of a property can be. However, just like the interior design of the building being sold, it’s important that a prospective buyer can ‘see’ themselves living there. […]

No matter your situation, read this article to learn what ground preparation is necessary before spreading mulch in your garden, borders and beds, regardless of whether mulch has been applied before of not.
Shop now